One July 3, Disney announced actress and R&B singer Halle Bailey had been cast as Princess Ariel in the remake of the Disney film “The Little Mermaid.” The film’s director Rob Marshall had this to say about the casting, “It was abundantly clear that Halle possessed that rare combination of spirit, heart, youth, innocence, and substance – plus glorious singing voice. All intrinsic qualities necessary to play this iconic role.”

Social media erupted with celebrities like Zendaya, Michael B. Jordan and Nick Jonas praising the artist for being cast as Ariel. Bailey also received support from her fans but there were some people who were not happy with an African American portraying a white princess. The hashtag #NotMyAriel began trending with users proposing a series of Caucasian actresses that could’ve played Ariel. The users of this hashtag also expressed the perceived importance of sticking to the original look of the character who had red hair and blue eyes.

Atlanta Tribune: The Magazine sat down with Atlanta casting director LaQuanda Plantt who founded Elle Casting and specializes in principal casting. She has also produced three Netflix films. Plantt shared her thoughts about Disney’s choice to cast Halle Bailey as its new Ariel.

AT: With the social and political climate that exist now, what does it mean that a black actress has been cast as the new Disney princess?

LaQuanda Plantt: Disney is taking a stand against the social and political climate and I am all for it. Our society is moving backwards; it is 2019 and it feels as though we have been pushed back 60 years. Ten years ago, Disney introduced the first black princess when they cast Anika Noni Rose as Tiana in “The Princess & the Frog” and in 2019 it is the perfect time for the character change. Ariel is a mermaid, which is a fictional character; her ethnicity can be anything.

AT: As a casting director is it common to cast black actors and actresses in non-traditional black roles? If so why is it so difficult?

AT: When taking into account Rob Marshal’s stance on Halle Bailey as a casting director, what other qualities do you think are necessary for this role?

Plantt: Rob Marshal hit the nail on the head. Ariel is a fictional, animated character possessing the characteristics stated as well as being a talented actor. Halle Bailey seems like a strong young black woman and in addition to being talented, she will need strength to deal with the negative backlash from the “Make America Great Again” folks. But so far, she has shown class. She’s got this.

AT: With the hashtag trending #NotMyAriel, many people who do not like a black Ariel consider it an attack on their childhood. Some have even gone so far as to say African Americans would be upset if Princess Tiana, the first black Disney princess, was cast as a white woman. Taking into consideration of the difference between colorblind casting and color conscious casting, how would that factor into this topic?

Plantt: Ariel is a mermaid, have you seen a mermaid swimming around? The hashtag [and] the backlash are comical to me. A fictional mermaid does not have a race, Disney just decided to make her white with red hair. This isn’t the same as casting Michael Jackson with a white actor, nor could a black actor be cast as Steve Jobs. Sometimes it really comes down to what makes sense. Now, if the role is a guy that has a fear of dating, anyone can play that role. This isn’t a black or white issue; all actors of all races are fighting to be considered for all types of roles, not just those that are stereotypical to their race. Those interesting individuals that state having a black Ariel is an attack on their childhood are being over dramatic.

In this article:color conscious casting, Halle Bailey, Influence, The Little Mermaid
Up Next:

Living With Strangers Could Save You Money … Is it Worth It? 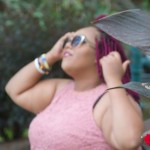